The results of lab testing.

Technicians tried to bend and damage them either by adopting typical consumers behavior in sitting (both on smooth or hard surfaces) and by putting pressure through stressing activity.

The results of Altroconsumo testing: the fuss and the uproar on bendgate were inconsistent.

Technicians started by investigating deformation forces at play inside people's pockets: sitting normally, with phones in front and back pockets with strain gauges applied on the display. Measured deformation was minimal, ranging from 100 to 400 µm/m for phones in the back pocket, and much less in the front. No effect visible on any phone.

They then proceeded to sitting in a "careless" way, also on hard surfaces, trying to apply as much force as possible on the phones inside the pocket. This is borderline unrealistic, but it can happen (e.g. if you have a phone in your back pocket and you sit heavily on hard ground, or on the edge of a metallic bench...).  Measured deformation: from 500 to 2000 µm/m.  iPhone 6 and 6 plus and Samsung Galaxy alpha were slightly bent after this. A crack in Sony Xperia Z2's left frame appeared.

Finally they were put in a bending machine, similar to the one used in Consumer Reports test, and several levels of pressure were applied. The two tests  exhert a different force on the phones, so they're not fully comparable but they do give some indications. In order to obtain similar deformation values to the "careful sitting" test, a force of around 10 kg had to be applied on the phones (typically enough to break a pencil). Sony Xperia Z2 was destroyed at 23 kg, all other phones survived up until 40 kg, at which point we stopped. The two iPhones and the Galaxy alpha were heavily and permanently bent but still working. The other three phones were only slightly bent or not at all (the Note 3 being the most resistant).

Again, the results of Altroconsumo testing: the fuss and the uproar on bendgate were inconsistent.

Portati in laboratorio e sottoposti a diverse sollecitazioni. I risultati 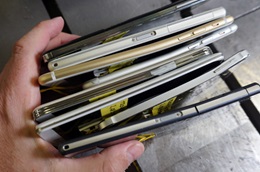