#demandjustice Campaign continues to support the class actions in Europe.

Altroconsumo has tested three Volkswagen Group cars sold all over Europe to strictly ensure that VW promised intervention would really align NOx emission levels with the value reported in the car Certificate. In all three cases, after the software-updating intervention, there was a statistically-significant increase of the NOx emissions measured in the NEDC cycle (+13,2 % for the AUDI Q5, +6,2% for the VW Polo and +23,2% for the VW Golf).

Volkswagen promises have been disregarded: the value of emissions resulting from the tests run by Altroconsumo and other European independent consumer organizations (Test-Achats in Belgium, Ocu in Spain and DecoProteste in Portugal) are increasingly higher than the ones reported in the Vehicle Registration Certificates of the cars. On the contrary, the VW Group states in the certificate released after the software-update “…after the intervention…all values measured at the time of homologation remain the same”.

With the results of the different testing cycles performed before and after the software update, it was possible to make an estimation of what the NOx emission values (in the NEDC) would have been like without the installation of the defeat device. These values would exceed not only the Euro 5 limit but even the Euro 4 limit: 268 mg / km for Audi Q5 2.0, 285 mg / km for Polo e 274 mg/km for Golf. Without the defeat device, VW would have never passed the NEDC-test for Euro 5.

In Europe, consumers have been deceived by VW on purchasing cars with different and worse features than the ones claimed by the car producer – unfair commercial practice publicly admitted by VW and after which Volkswagen USA already compensated North American consumers with up to $ 10,000 per car owner. So far, the only response to European consumers has been that removing the defeat device would solve the issue. This is not true, as proved by Altroconsumo. The ongoing class actions in Italy and in other countries are there to fight so consumer rights will not be stepped on.

#Demandjustice Campaign on dieselgate launched last week by Altroconsumo in Italy, Test-Achats in Belgium, Ocu in Spain and DecoProteste in Portugal continues. European car owners must be compensated. The European Parliament heard our call and chose to support us on this. They declared that all consumers impacted by the dieselgate scandal – such as VW owners – should be financially compensated. Volskwagen must take responsibility #demandjustice 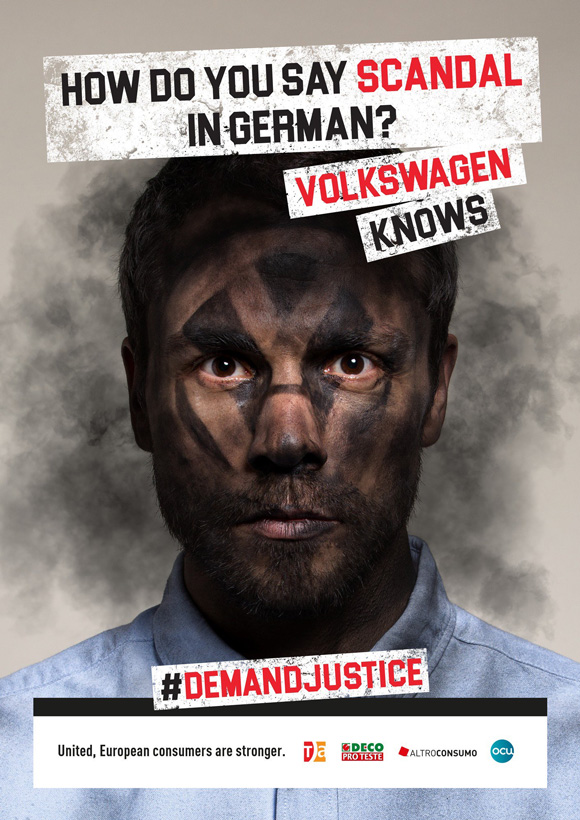 The aim: to demand justice on the VW emission fixing scandal.